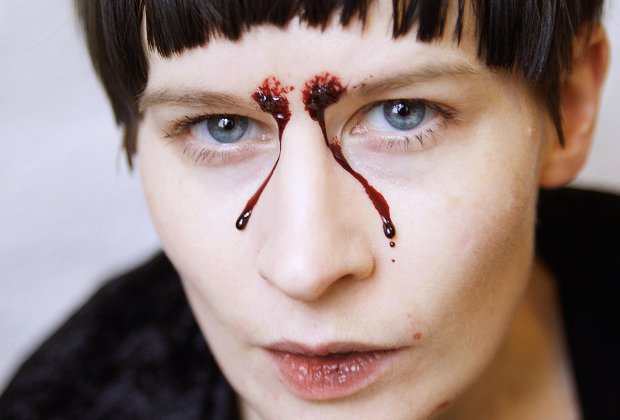 The music industry seems to let a lot of things pass, get brushed under the rug. So why do some seem to always stir controversy, even if their subject matter is positive and progressive? Jenny Hval undoubtedly asked herself a similar question following her critically acclaimed, but society stirring 2015 project, Apocalypse, Girl, where she managed to cop backlash from various conservative publications simply for analysing the confusion and celebration of sex and gender perplexity. However, no controversy big or small stopped Hval furthering her mysterious, characteristically experimental splice of art/ambient pop and nearing-abrasive sound collages on 2016’s Blood Bitch, the aptly titled, undoubtedly feminist-tinged concept album focused on the peculiarities of menstruation.

Drowning in self-referential melancholy and synth-driven soundscapes of introspective surrealism, Blood Bitch dons the guise of vampirism and traditional horror movies to characterise the female body and its functions, venturing into the draw of love and consequent understanding. Alongside such experimental labelmates, it’s only natural that Hval harnesses the abstract extensively, with instrumentation featuring crushing electronics, middle-eastern percussion, haunting drone and intimate spoken word passages pouring crippling atmosphere for her sometimes warbled, harrowing voice to push the powerful narrative. Together, Blood Bitch is an ode to abstract romanticism faded by gender misunderstanding and ultimately a call against the taboo as she beckons, “Don’t be afraid, it’s only blood”.

Leading single, “Conceptual Romance” sees Hval adopt her unrestrained trill to explicitly describe her personal battle for understanding with past partners about her body over softened bass and pulsating electronics. Similarly, the conceptual centrepiece, “Untamed Region”, is a minimal-synth inspired, ambient and spoken word opus that follows a woman facing the unexpected feeling of blood in her sheets before tasting and smearing it over the walls of her home in empowerment. The following beautiful track, “The Great Undressing”, realises Hval harnessing her angelic timbre to ask, “You must think I’m disgusting”, to comment on the irony of interdicting natural processes. Following with the complex sound collage of “The Plague”, Hval proves her ability to encompass sonic concept to produce sounds both polarising and powerful in beautiful protest.

Modern art pop like that of Hval’s seems to have become one of the more charged genres in recent times, offering a dip into individuality and sentiment that borders the line of experiment and accessibility. Along with contemporaries, Frank Ocean, Julia Holter and Twigs, Hval continues to expand pop into other territories while simultaneously unfolding a glimpse into an unideal or unnormalised reality. Although she states that, “it’s a constant struggle” in an interview with Huck Magazine, Blood Bitch lives up to its hard-hitting name with determination toward societal change and showed that she was ready to cop the backlash that she would inevitably endure, which was essentially the dissent that she was arguing against.